This article is from April 2019, some of its contents might be outdated and no longer accurate.
You can find up-to-date information about the engine in the official documentation.

Hello Godotters, my name is Fabio Alessandrelli, you may know me by my handle fales (faless on GitHub). Here are a few words about my Godot journey.

I first discovered Godot in 2015 while looking for a good game engine (that would also work on GNU/Linux) to develop a small game for a university project with a friend.

It was the early era of Godot 1.0, which was open sourced just few months before.

It was love at first sight, and since then, I slowly started contributing to its development, proposing small PRs whenever I found something that was missing or not working and I had the time to fix, learning a lot in the process.

Finally, I started specializing in the networking subsystem (again, because I needed it for my projects). I slowly became the “network guy”, so if your networking PR or issue is stalling, yes, it’s my fault, I’ll try to review them soon™.

One of the thing that struck me after some time playing with Godot, was how easily it enables developers to export for different platforms, and among those, HTML5/WebAssembly (thanks to the great effort of many developers, especially eska, the current HTML5 platform maintainer). Enabling developers to share their beautiful games running in browsers is a great feature for an engine!

Networking trough browsers used to be very limited and originally only HTTP requests were possible.

Then, in December 2011, the WebSocket protocol was standardized, allowing browsers to create bidirectional channels to a WebSocket server. The protocol is pretty simple, it begins with an HTTP request from the browser with some protocol specific headers. From there, if the server accepts the connection (replying with similar headers), the connection is kept open, and data begins to flow bidirectionally using the quite simple protocol message format.

That though, wasn’t enough. WebSockets still uses a TCP connection, which is good for reliability but not for latency, rendering it useless for real-time applications (e.g. VoIP, fast-paced real-time games).

For this reason, since 2010, Google started working on a new technology called WebRTC, which later on, in 2017, became a W3C candidate recommendation (i.e. it’s considered quite stable but it’s still being worked on). WebRTC is a much more complex set of specifications and API, and uses a lot of other technology underneath (ICE, DTLS, SDP), to provide fast, real-time, and secure communication between two peers.

The idea, is to find the fastest route between the two peers and establish whenever possible a direct communication (as in try to avoid a relaying server).

This comes at a price though, and the price is that some media information must be exchanged between the two peers before the communication can start (in the form of Session Description Protocol – SDP strings). This usually takes the form of a so-called WebRTC Signaling Server. 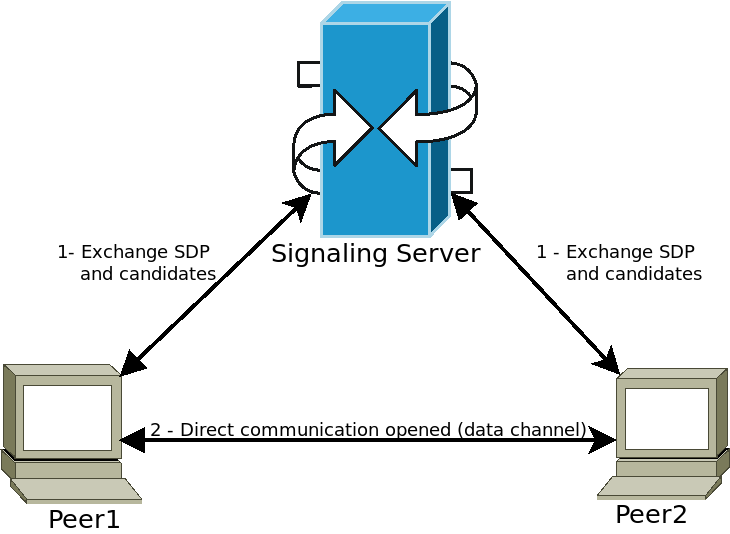 A signaling server (for example a WebSocket server) to which peers connects and send their media information. The server then relays those information to other peers, allowing them to establish the desired direct communication. Once this step is done, peers can disconnect from the signaling server and keep the direct P2P connection open.

During the last month, I’ve spent most of my time (paid by the Software Freedom Conservancy thanks to a grant by Mozilla Foundation) working on a WebRTC implementation for Godot Engine. Part of the work, was already done by Brandon Makin during GSoC 2018.

I focused on getting the Javascript version ready, and porting the work of Brandon Makin to GDNative (to support WebRTC in native exports, without having to bundle the huge WebRTC Native Code reference library into Godot sources). So, while the WebAssembly export will have WebRTC support out of the box, native exports (e.g. GNU/Linux, Windows, macOS, Android, etc.) will need a GDNative library to work.

This is done by having a WebRTCGDNative class, which we then implement via GDNative, and will be released in a separate repository.

But how does this work?

Here are the Godot-exposed functions for the current state in my branch (yes, yes, I will document them, when the work is ready :) ): 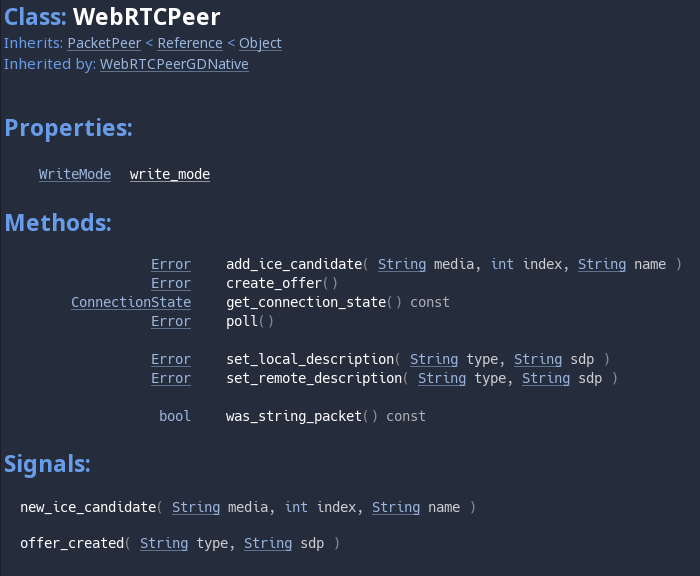 And here is a simple schema on how to use it:

Wait, that doesn’t look simple! Well, that’s true, WebRTC has a fairly complex setup phase, but it can be boiled down to 4 steps:

After that, the connection will be established!

You will need a recent build of Godot’s master branch: https://github.com/godotengine/godot/tree/master

A compiled version of the WebRTC GDNative library is available at:

A small demo to test it can be found at:

The work on the reference WebRTC signaling server based on WebSocket is available at: