In previous Godot versions, we didn't have a Navigation server and everything was done through the use of the Navigation node. While this was not a problem, it was a limited solution and the user was called to integrate the logic to deal with the navigation.

During the design phase, we researched a solution that provides:

So, the idea to improve the Godot navigation was to integrate a new server that would provide all the above functionalities; so was the NavigationServer born. If you're unfamiliar with the concept of "servers" used in the Godot architecture, you can refer to this past devblog and the documentation.

Some new concepts appeared in the Godot world - let's talk about these to get a good overview.

The Map represents the entire world, it's similar to the space for the physics engine, but this one is used for the navigation.

The Map is an agglomeration of regions and can be created by adding our old and dear Navigation node in the scene.

The Region is a portion of the map and can be created by adding the NavigationRegion node.

Despite the two new keywords, Map and Region, the Navigation node and the NavigationRegion node are the same as before, from the editor prospective, so you have full retro compatibility and their usage remain the same.

Now the NavigationRegion can be added during gameplay, and it's possible to change its transform or even bake the navigation mesh data at runtime.

The NavigationAgent is a new node that allows to navigate the Map easily; indeed you don't need anymore to deal with path resolution and path navigation code.

The agent is also responsible for avoiding collisions.

The NavigationObstacle is really simple, and it's used for collision avoidance. You can use it to mark its parent as an obstacle, for example under a PhysicsBody or KinematicBody node.

We saw what's new in the NavigationServer but let's have a break with theory and start to use it!

The NavigationServer is a Godot 4.0 feature and at the time of this writing is part of the unstable master branch; so as first thing I'm going to build Godot from source, see you in a moment!

Note: Here I'm showing a 3D example, but you can reproduce the exact same steps to use it in 2D!

Here we go, I assume that you are already comfortable using Godot, so let's create the world scene:

As you can see it's similar to the Godot 3.x navigation setup: we have a Navigation that represents the entire map and two NavigationRegion regions.

Note: The meshes have a common static body under their node.

Remember to hit the button Bake NavMesh to bake the navigation data, as you used to do in 3.x!

A navigable map is nothing without something that navigates it! So guess what? Let's create a character that is able to navigate it.

Open another scene, add a PhysicsBody and set its mode to Character; then add all the nodes that you see in the picture below:

The RayCast node is used to simplify the code to get the floor normal.

The NavigationAgent node is a new addition: it's a handy utility used to navigate the Map. It does all the hard work for you: indeed, you don't need anymore to deal with the path, instead each frame you have to query this node using get_next_location() to know what is the next location which is free to reach.

This is the character code:

In these cases the function will reload its internal path, and will return the next free location.
As before, you are free to manually query the Navigation node, but using the new NavigationAgent is much simpler and efficient.

We now have a character, so let's add it to the world:

The agent just need a Vector3 as target to reach, and in our case I want to take this position from a spatial node; notice this code in the character script:

I've added a Position3D into the world, and set its NodePath as the character's target_node_1 exported property. The result is this:

You can notice that even if the target is not reachable, the agent will bring the character as close as possible. What if we added a ramp at runtime‽

I've created a simple ramp in a new scene and added a script with this code to the NavigationMeshInstance2:

Boom! Once the region rebaking is done, as promised, the agent navigates through the new added ramp to finally reach the target location! It's simple, isn't?

Ok, cool... but what does the agent do if I move the region around?

I've added an AnimationPlayer node to test this case:

So once again the agent takes care to do the hard work of checking the map reloading for us.

Until now everything was static, and we had the need to re-bake the navigation mesh when we added a new piece of map.

The first thing to do is to add some dynamic obstacles into the scene; I've added some physics balls and set their velocity from the editor. 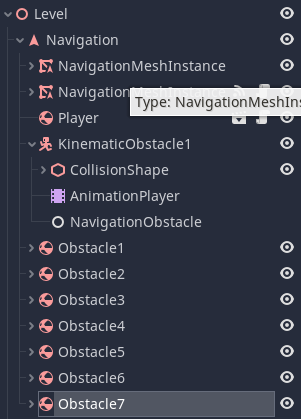 We still want some control over the things that the collision avoidance takes into account. For this reason, in order to allow the agent to see the dynamic obstacles, you have to add the NavigationObstacle node as child of the obstacle.

This node doesn't have any property because it's able to figure out automatically the size, velocity and position of its parent.

By default, the agent collision avoidance is not active. To use it, we have to make sure to set the character velocity using:

You have to connect a function to this signal, and use the given safe_velocity to move the character.

Now you can play the scene, and voilà:

Note: Collision avoidance behavior can be tweaked per agent, by changing the NavigationAgent settings. You can change velocity, time of response to obstacles, and some other useful things.

This was an introduction to the new NavigationServer and NavigationServer2D coming up in Godot 4.0. The integration of these new servers was made possible thanks to the sponsoring of IMVU!

Give it a check, and enjoy use Godot! And don't hesitate to provide feedback about this new feature, which we can polish further until the actual 4.0 release.