For most game developers, shaders are this scary monster that presents itself with such a complexity that it seems out of reach. In reality, shaders are quite simple by default and just get more complex the more you add to them.

To explain the idea of how shaders work, let's consider a very simple shader for drawing a sprite to the screen. Our sprite is 32x32 pixels in size, and it must be drawn at some position. (Disclaimer: This is not intended as a tutorial but just to give you an idea about how things work if you don't).

The following OpenGL code sends the sprite to the shader for drawing: 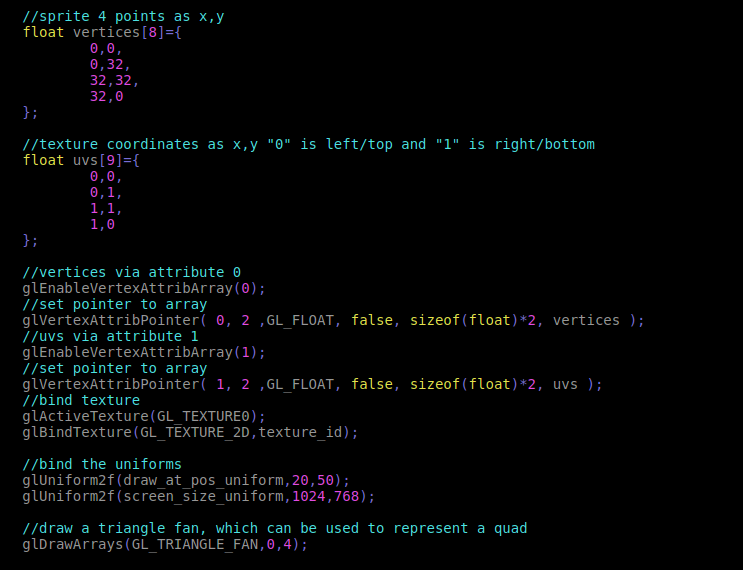 As you can see:

After calling glDrawArrays, the vertex program (also called vertex shader in DirectX terminology) is executed once per vertex (we are sending 4 vertices). Each vertex is a pair of floats (we configured this via glVertexAttribPointer()).

This code no longer runs in the CPU, in fact it runs on the GPU! Again, it is executed per vertex. The output of the vertex program must fit in a "box" of size -1 to +1 in X, Y and Z. The vertices become primitives (in this case, a triangle fan, two triangles that are drawn as a quad) and any primitive that goes beyond the -1 to +1 range is clipped. As such, this is called "Clip Space".

All we need to know is that we must convert the screen coordinates (for a screen size of 1024x768) to this space, so the natural way of doing this is:

These triangles are then drawn to the screen (remember, again the screen can be of any size, but OpenGL will respresent it in the -1 .. +1 range for drawing).

For each pixel drawn to the screen, OpenGL will interpolate the outputs that were generated from the vertex program and use them to fill the triangle. In this case, the UV coordinate (for reading the texture). This process is done in the fragment program (pixel shader in DirectX terminology).

In the fragment program, the input is the UV coordinate (interpolated), and the output the screen color. We use the sprite texture uniform to read the sprite pixels.

As you can see it's not really that complex.

Of course, if you are working on a game there is a lot more things going on. Vertices have to be transformed in 3D space, and there are many features the engine provides for you such as:

This gets quite messy. Don't believe me? This is how long Godot's default 3D shader for GLES 2.0 is:

Truth is, however, that far most of the times a programmer wants to write a shader, it only intends to change a few parameters such as how the texture is drawn, changing colors, material properties, etc. Because of this, Godot comes with a simplified shader language (very loosely based on OpenGL ES 2.0 shading language). Users can write the vertex, fragment and lighting shader using a lot of pre-existing information.

As an example, to draw a sprite with a texture in Godot, only this is required:

Just that, and Godot takes care of the sprite transform, applying light and shadows to it, sending vertices, etc. It's much, much simpler and the reason people use game engines in the first place :).

A question that comes up often is why did Godot choose not use an existing shader language. There are a few very clear reasons regarding why we went the current way:

The result of this is that shaders always work as intended, with no surprises.

A lot of developers, however, complained about the Godot shader syntax being too limited. As a result, for Godot 3.0 we did the following changes:

Here is an example of how it looks: