With the Godot 3.1 release, the Visual Shader editor was recreated from the ashes of its Godot 2.x ancestor. While usable and packed with visual features, Visual Shaders lacked many features from their Shader (script) big brother. A new update has been prepared for Godot 3.2 to solve this problem.

My name is Chaosus, I'm the one of the core contributors of Godot, and I'm gladly presenting this update to our beloved engine. So, let's begin reviewing the new features.

The menu which the user used for adding nodes to the shader graph was the most unwieldy part of the old visual shader graph. This menu has been rewritten to a comfortable, tree-based popup. As you can see, there are many categories inside, each one with subcategories filled with nodes. 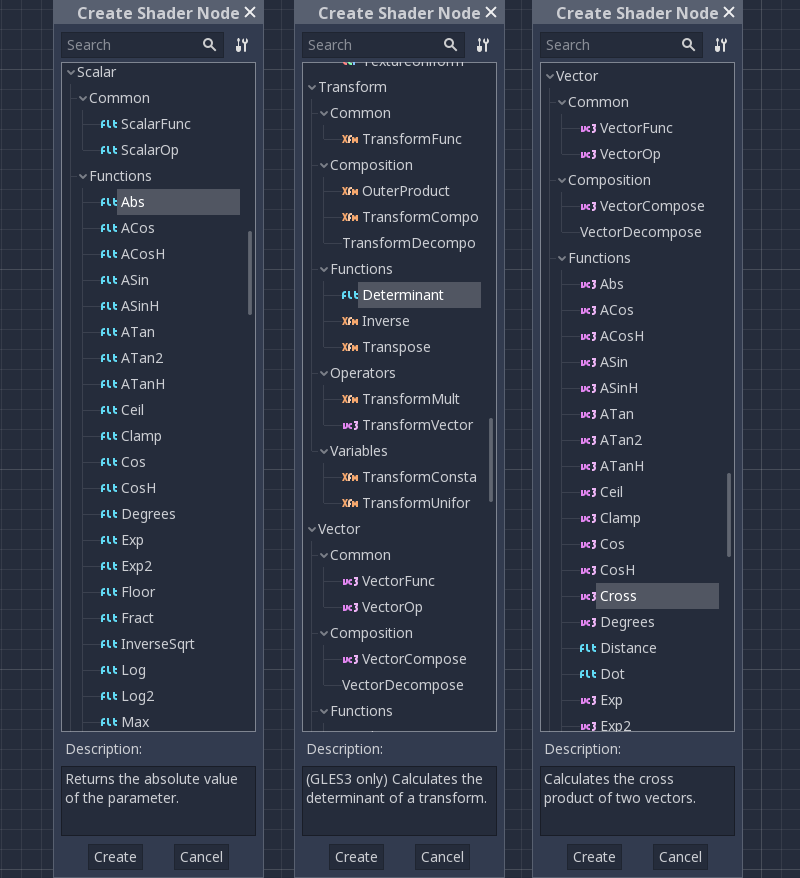 If you are lost in this tree or want to find a specific node, you can use the search bar above the tree.

Once you've found the required node, you can add it to the graph by using drag and drop, pressing the Create button, hitting Enter, or double-clicking on the node in the tree.

Also, this popup has the following properties:

There a bunch of new nodes added as the part of this update. Here are the lists of new nodes.

For Scalar and Vector:

Exposed to Vector from Scalar: 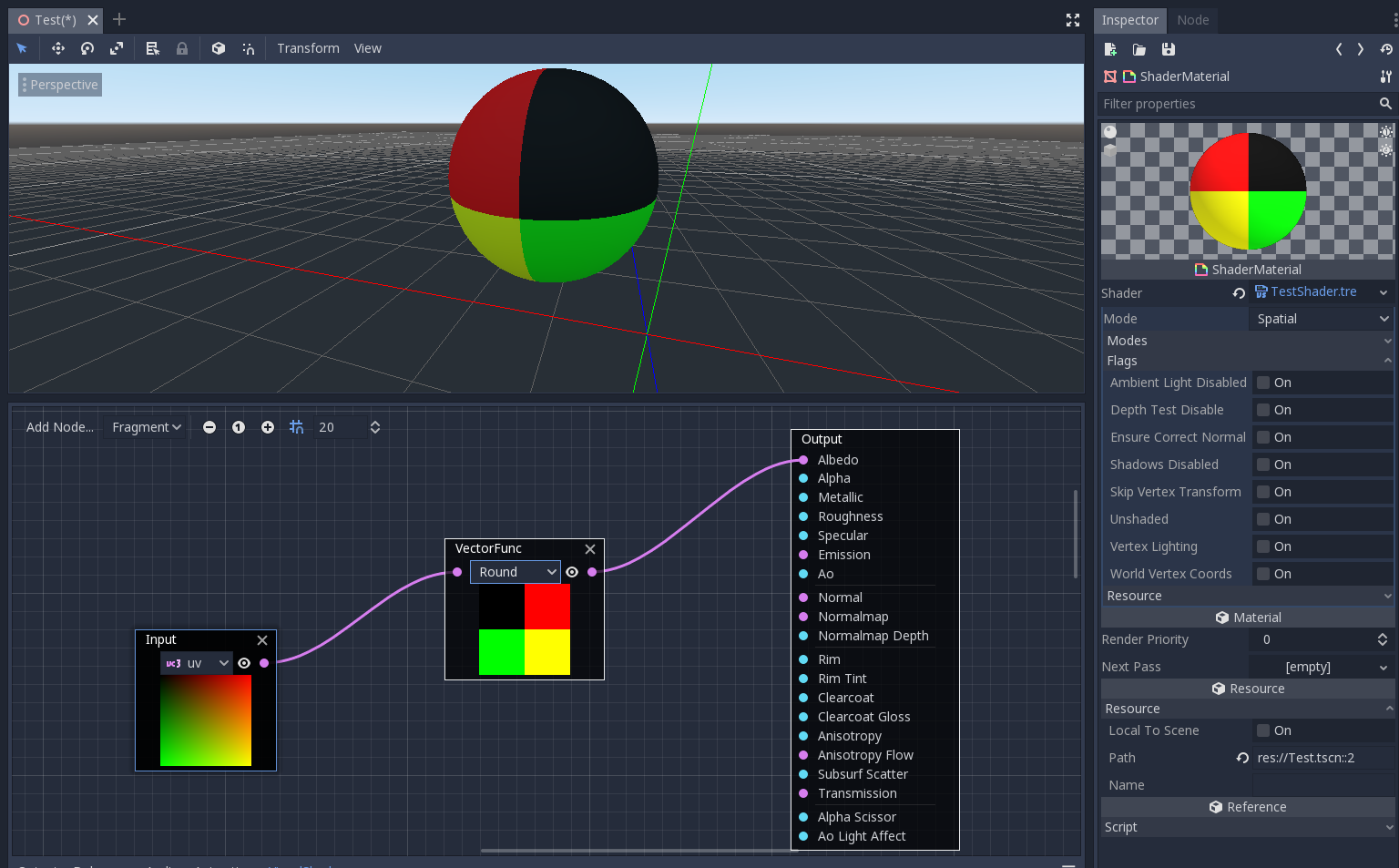 These nodes are helpers to link the associated input parameters in the Input node. Currently, they are subdivided in All (with input parameters which can be used in all three shader modes) and Vertex/Fragment/Light categories for comfortability. 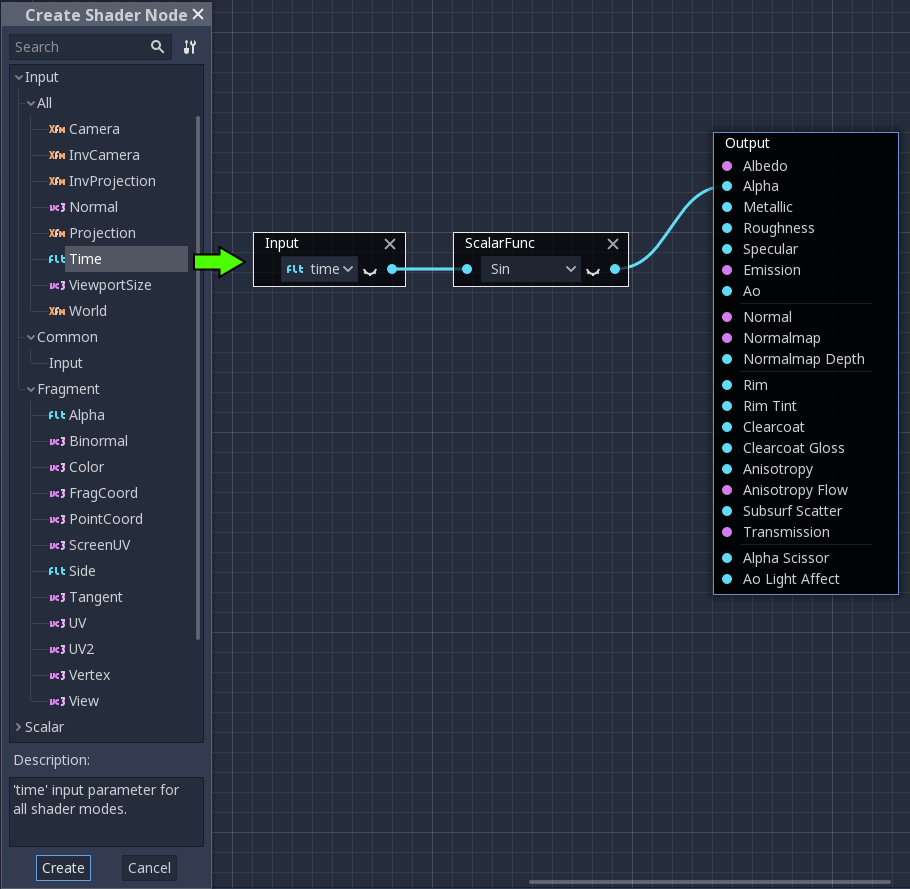 The Expression node allows you to write Godot Shading Language (GLSL-like) expressions inside your visual shaders! The node has buttons to add any amount of required input and output ports and can be resized. You can also set up the name and type of each port. The expression you've entered will apply immediately(after focus leaves out the expression text box) to the material, any parsing or compilation errors will be printed to the Output tab. The outputs are initialized to their zero value by default. The new node is located under the Special tab and can be used in all shader modes.

This example gif shows you how to create and use it. It's quite simple as you can see.

The possibilities of this node are almost limitless – you can write complex procedures, and use all the power of Godot (text-based) shaders, such as loops, discard keyword, extended types, etc. For example: Many thanks K. S. Ernest Lee (iFire) for helping me fixing the bugs, testing and giving suggestions to create this feature!

The Fresnel node is designed to accept normal and view vectors and produces a scalar which is the saturated dot product between them. Additionally you can setup the inversion and the power of equation. Currently it is placed under Special menu section.

You can read more about this nice effect on this blog post or the dedicated Wikipedia article.

The Boolean node was not exposed to the visual shaders until now. They can be converted to Scalar or Vector to represent 0 or 1 and (0, 0, 0) or (1, 1, 1) respectively. This property can be used to enable or disable some effect parts by one click.

The If node allows you to setup a vector which will be returned after performing comparison between a and b. There are three vectors which can be returned: a == b (in that case the tolerance parameter is provided as a comparison threshold – by default it is equal to the minimal value, e.g. 0.00001), a > b and a < b. 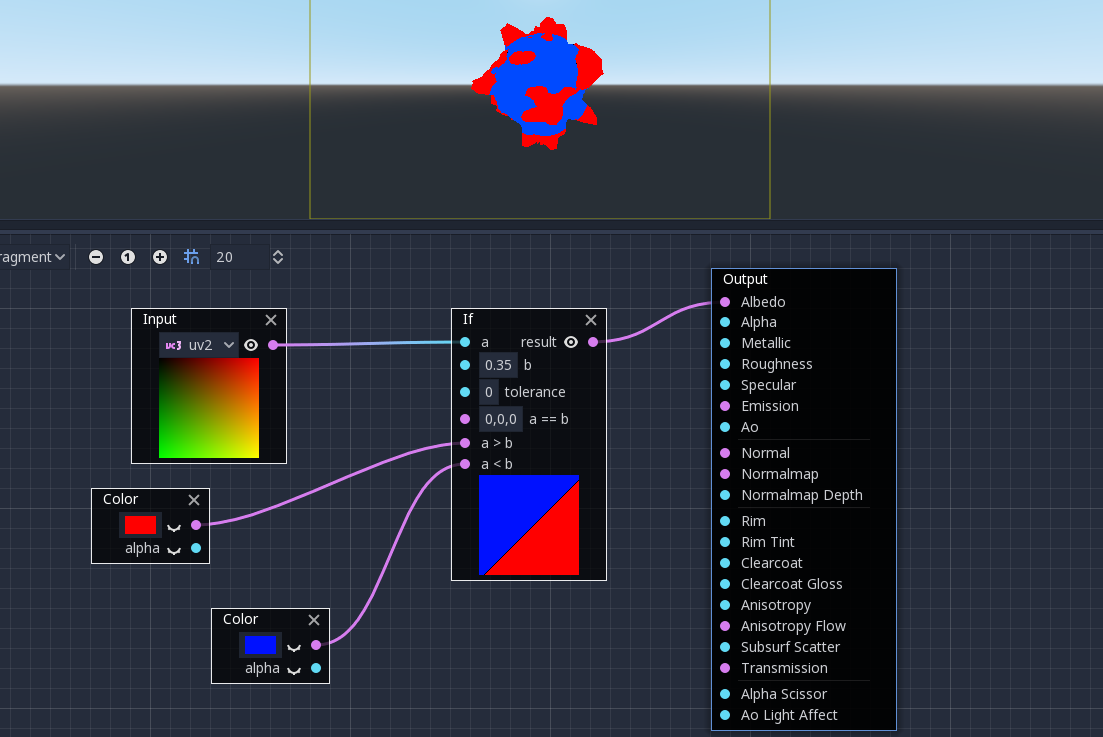 The Switch node returns a vector if the boolean condition is true or false. Boolean was introduced above. If you convert a vector to a true boolean, all components of the vector should be above zero.

These are useful effects which have been added to ColorFunc (a container for such effects), so there is no need to create them manually. 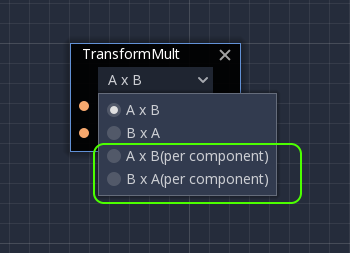 These nodes are Fragment specific, and cannot be used in the Vertex mode context. They are put under the Special category tab and divided into ScalarDerivativeFunc and VectorDerivativeFunc. 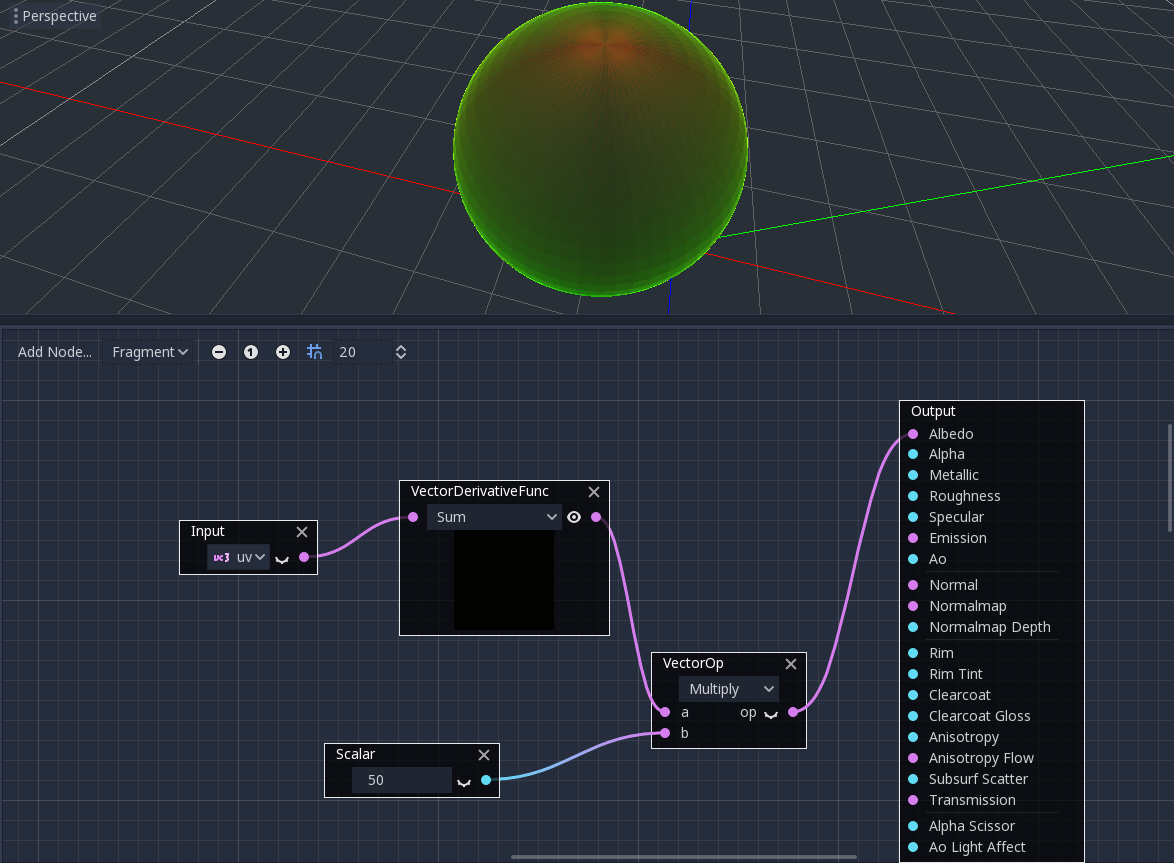 All the above improvements have been made in Godot's master branch (the development branch for the future Godot 3.2). As of this writing, you have to build the compile the master branch from GitHub or use one of the nightly builds provided by community members to test it.

That's all for now, in the future new types of nodes can be easily added to this new system (especially after Vulkan has been implemented), thanks to the magnificent possibilities provided by Godot's design!