Godot contributors released the Godot 3.2 stable branch in January 2020 as a major update to our free and open source game engine. The main development effort then moved towards our future major version, Godot 4.0 (see Godot's Devblog for a preview of some things to come). But Godot 4.0 is still a long way off, and in the meantime we want to provide the best support possible to all Godot users, so the 3.2 branch is worked on in parallel and receives minor updates to fix bugs, improve usability and occasionally add some compatible features.

After fixing the most urgent issues in 3.2.1, we could take the time to add some new features to the 3.2 branch which we believe are important improvements to the Godot 3.2 experience (especially since we expect at least one year of development before 4.0 is released). Some of those features had already been partially implemented before the 3.2 release, but not merged to avoid delaying the release (any new feature involves new issues and a certain amount of time to improve and stabilize its implementation).

This brings us to Godot 3.2.2 released today, which includes a number of big new features that have been merged and tested over the past few months, on top of the usual batch of bug fixes, usability enhancements, documentation and translation updates.

Download Godot 3.2.2 now and read on about the changes in this update.

C# support for the iOS platform

Thanks to our Mono/C# maintainer Ignacio (neikeq) and the sponsorship of Microsoft, C# projects can now be exported to iOS. This nearly completes the platform support for C# projects in Godot (only UWP support is still missing).

iOS export templates are now included in the Mono build. Exporting C# projects to iOS should be done from macOS using the classical workflow, and the scripts will be automatically compiled Ahead-of-Time (AOT) for iOS. 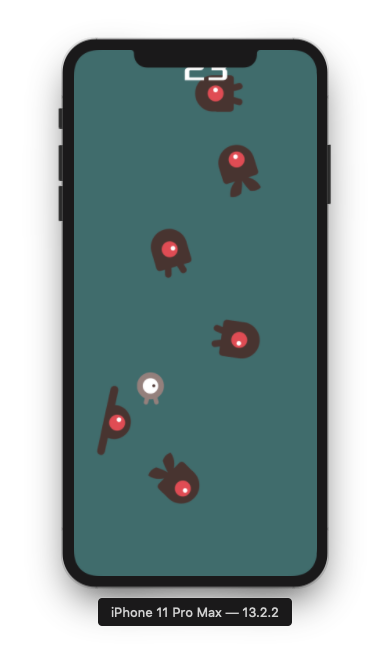 Dodge The Creeps C# demo running on the iOS Simulator.

2D batching for the GLES2 renderer

While most rendering work was postponed for the 4.0 release with its new Vulkan-based renderer, our contributors lawnjelly and Clay (clayjohn) decided to give some more attention to the 3.2 branch.

Among a wide array of bug fixes to the GLES2 and GLES3 renderer, they also designed and implemented a 2D batching system for GLES2, which greatly optimizes the 2D rendering performance in many situations. This drastically reduces drawcall-related bottlenecks and can give massive gains in specific scenarios (drawing lots of sprites, big TileMaps, text rendering). It's not magical, and projects have to fulfill some conditions to benefit from it (and actually have a drawcall-related bottleneck). Lawnjelly and Clay are working on some documentation to help you make the best use of the new batching - it will soon be in the main docs, but until then you can refer to the current draft. 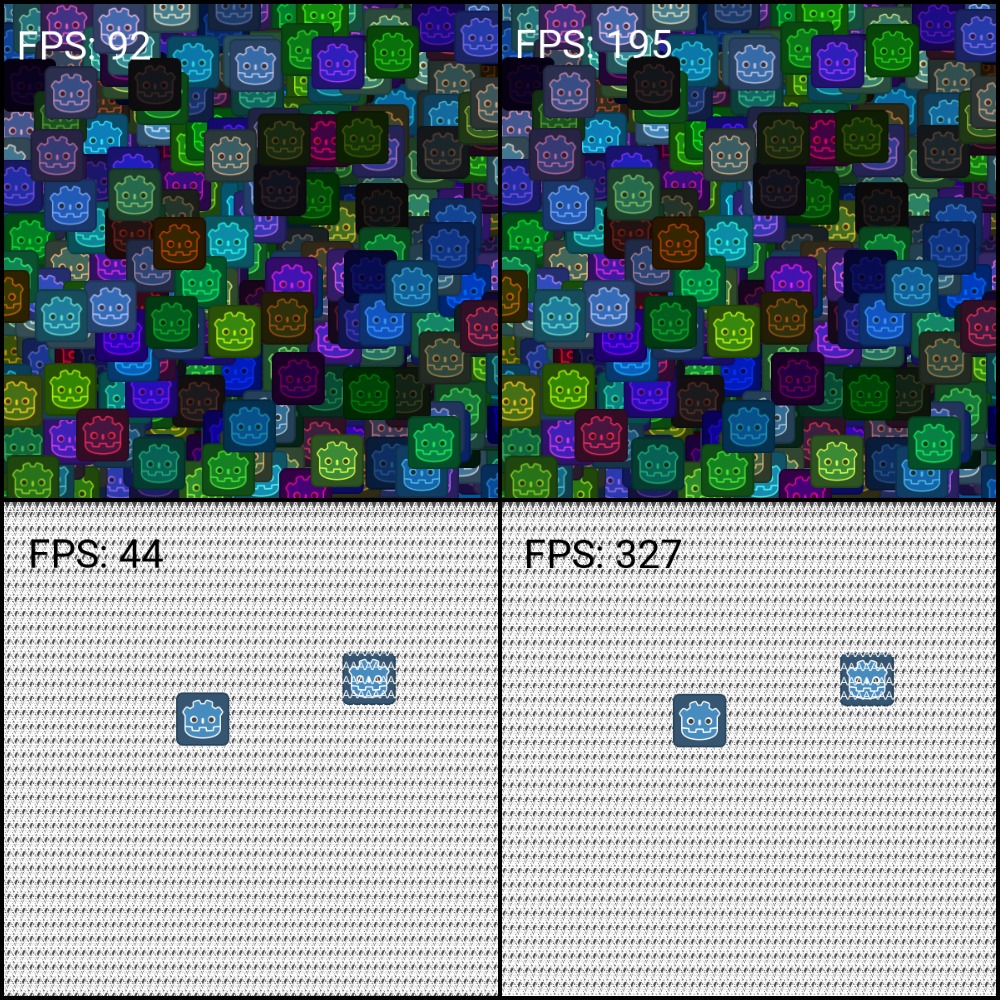 Top: 10,000 Sprites with a randomized modulate and position.
Bottom: 8 layers of a screen full of "A"s with two Sprites intermixed.

Re-architecture of the Android plugin system

Godot 3.2 came with a brand new Android plugin system, and notably the possibility to build custom APKs from your project folder with any additional plugins/modules that your project needs.

Our Android maintainer Fredia (m4gr3d) had done a lot of work back then to improve Juan's initial custom build system, which led him to notice many things that could be modernized to be better suited to the current Android ecosystem. Notably, he re-architectured the plugin system to leverage the Android AAR library file format, and allow the easy distribution and use of Android plugins using a custom .gdap metadata file.

The Android plugin documentation has been updated with instructions on how to write plugins for this new system. Porting existing 3.2 plugins should be fairly straightforward.

Note: In this process, the GodotPaymentsV3 built-in Android module has been porting to an external, first-party GodotGooglePlayBilling plugin thanks to Timo. See the updated Android in-app purchase docs for a migration guide.

Our networking maintainer Fabio has been working for over a year on networking features and the HTML5 platform thanks to an award from Mozilla. Almost all of the networking improvements made their way into Godot 3.2, but DTLS support and its ENet integration came a bit close to the release date and was postponed to 3.2.2.

This is now included and ready to use! See the dedicated devblog for usage examples.

Note: We recently found out that Godot's UDPServer (and thus DTLSServer) do not work on Windows. Fabio is working on a fix which should be included in Godot 3.2.3.

Many Godot users working on bigger projects have run into issues linked to having a Variant pointing to an Object becoming a "dangling pointer" once the Object is released (e.g. with free()). Such pointer could be reported as valid even though the memory it points to was not, or worse, that memory could now hold a different object, leading to hard to debug situations.

Thanks to the work of Pedro (RandomShaper), debug versions of Godot (e.g. when running in the editor, or exporting a debug build) will properly handle such situations and, when using the debugger, provide a clear error message so that the user code can be adapted to prevent the issue. Checks are currently not done in release builds for performance reasons, so make sure to handle those errors in debug builds before shipping a release build in production.

It's also worth noting that, while it's not included in the 3.2.2 build per se, the online documentation for Godot 3.2 has also seen hundreds of changes since the original 3.2 release, with a lot of new content and many updates to existing tutorials to match the 3.2 feature set.

Additionally, translators have been hard at work to localize the online documentation, and we now have 100% complete documentation in French, as well as near complete versions in Chinese (Simplified), Japanese, and Spanish. You can join the translation effort on Weblate and help bring high quality localized documentation to game developers all over the world!

A big thankyou to all the documentation and localization contributors!

The 3.2.2 release includes more than 800 commits from 140 contributors – thanks a ton to all of them for their work! Contributors fixed a wide range of issues (both new and older ones), as well as improving usability and documentation. Dozens more have been involved in updating translations to make Godot 3.2.2 available in over 20 languages!

Consult the complete changelog (sorted by authors or by reverse chronological order) for an exhaustive list of all changes.

Here's a hand-picked list of the some of the main changes in Godot 3.2.2:

While we strive to preserve compatibility in the 3.2 branch, there's a lot of surface covered in a game engine and some bug fixes might have an impact on your projects if you somehow used a bug as a feature. Here's a list of known incompatibilities / changes that you might need to be aware of:

If you experience any unexpected behavior change in your projects after upgrading from a previous version to 3.2.2, please file an issue on GitHub.

The illustration picture is from Oddventure, a charming pixel-art, lore-rich and turn-based crazy RPG set in a cursed fairytale world, inspired by the Mother series and Undertale, and developed by Infamous Rabbit. Wishlist it on Steam, and follow the development on Twitter! Check the demo on itch.io, and stay tuned for an upcoming Kickstarter by following development on Twitter and @InfamousRibbit.