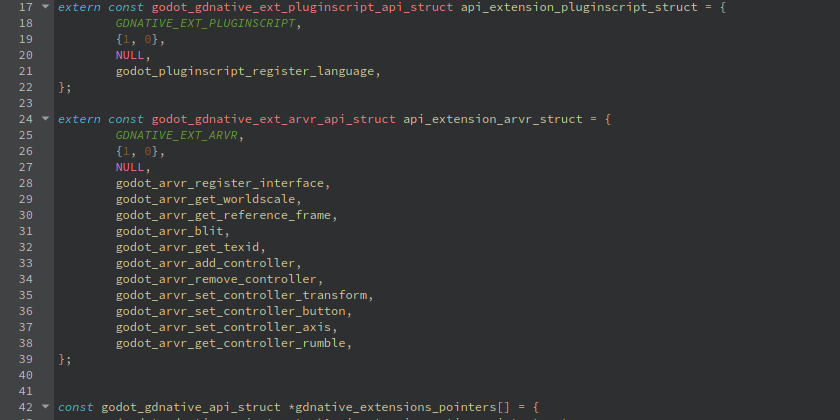 A look at the GDNative architecture

The GDNative architecture changed a lot since the very first version of the then-called "DLScript". With the release of Godot 3.0 approaching and the API getting more and more stable it is a good time to give an overview of what GDNative actually looks like now.

A GDNativeLibrary is a resource type that abstracts over the actual binary files needed for each platform. It contains a few properties (how Godot should deal with repeated loads of the library, name prefixing, ...), a list of "entry" library paths and a list for libraries that an "entry" library depends on.

Those lists are a simple mapping from a set of feature tags to either a file path or an array of file paths in case of the dependencies.

Godot has a feature tag system. A feature tag hints that a certain attribute or feature is available. Example tags are Windows, X11, 32, 64, mobile and many more. When exporting a game it is also possible to define tags yourself which then might change how the game will work.

For more information on feature tags see this docs page.

An entry in either of those lists inside the GDNativeLibrary resource consists of a key and a value. The key is a .-separated list of feature tags that need to be present.

In the Godot editor there is a graphical user interface to make the editing of such a resource more user friendly.

All the entries will be checked from top to bottom and entries with a non-existing feature tag will be skipped. The first entry where all the tags are available will be used, so order is significant.

One of the properties of a GDNativeLibrary is whether that library is supposed to be used as a singleton library or not. A singleton library gets loaded at Godot's startup, as early as possible, and the gdnative_singleton function inside that library will be called. This can be used when a library offers functionality that needs tight integration into Godot. This is usually done via GDNative extensions - more on those later.

GDNative objects represent loaded libraries. Which library to load will be looked up from a GDNativeLibrary resource. From inside Godot's C++ code it can be used to call functions inside the library. That way to call functions is very flexible, low level and unsafe, which is why this is not possible from a scripting language like GDScript.

If you really want to call functions directly from a scripting language the GDNative.call_native method can be used. A so-called call-type is used to abstract over the low level details of the function pointer call. There is only one predefined call type, standard_varcall, which expects the function to be called to have this signature godot_variant function_name(godot_array *). A singleton library can register new calling types if needed.

If a library wants to use Godot functionality it needs to call some Godot code in some way. Since portability between C++ compilers is very problematic we chose to have a C API which is wrapping the C++ calls. That opens up a variety of languages to access that API but it also makes it more verbose to work with.

In order to call those C wrapper functions the library needs to know the locations of those functions. The naive approach is to simply leave them blank and let the operating system's library loader fill in the addresses.

Unfortunately this doesn't work equally well on all platforms (cough Windows cough), so in order to keep the code and procedure to set up a GDNative library mostly the same on all platforms we decided to take another route: passing a struct of function pointers to the library while loading it.

That struct lives inside of Godot and contains versioning information, fields for future API modifications and also an array of extension APIs.

Some people prefer to simply write function names instead of accessing them via a struct, so when needed Godot's build system can generate a static library that wraps all the function pointers into static functions with the same name.

GDNative extensions are a way to offer functionality to libraries that aren't a part of the GDNative/Godot API itself. They can be used in different ways and below a few current extensions are listed.

Extensions usually have a C API, possibly with custom data type definitions. Oftentimes inside of Godot there are C++ classes/methods that are used to wrap C functions while being still tightly integrated with other features. ARVR and PluginScript show that.

Every extension has its own sub-API-struct which contains versioning and a field for future API modifications.

The whole ARVR API needed to implement a VR driver using GDNative can be found in this file.

The starting point with that API is the godot_arvr_register_interface function which needs to be called from a singleton library. The structure that needs to be passed as a parameter contains more function pointers which then will be called by Godot.

In the earliest days of GDNative development it was only planned to use it for scripting, later it turned out to be much more flexible and useful than that and the scripting part is now only an extension.

NativeScript implements a "scripting language" (at least that's how it's called in Godot - something you can use for "scripting"), but instead of using text and files for the logic (like GDScript does for example) it uses a GDNative library for those things.

All the functions used to pass that information to Godot can be found here.

A minimal demo can be found here.

Because NativeScript operates on libraries only it doesn't care which language was used to create the library, which makes NativeScript a popular way to use Your Favorite Programming Language inside Godot (even thought doing so still requires a lot of effort).

For more flexible and a more script-like feeling PluginScript should be used (if it suits the language).

For now there is only one major application of it in the wild, which is the godot-python project.

Similarly to the ARVR extension, the API for PluginScript is relatively small, having only one function to call, godot_pluginscript_register_language. That function accepts a struct with function pointers and other information about the scripting language.

After a restart of the editor the language should be ready to be used.

We are planning to create more extensions, for example for pluggable audio and video codecs.

All in all we are pretty satisfied with the current architecture of GDNative, next steps working towards the release will be more documentation and refining language bindings.