This article is from October 2017, some of its contents might be outdated and no longer accurate.
You can find up-to-date information about the engine in the official documentation.

Alpha2 is around the corner and I’m glad to announce that it will come with the first usable version of C# as a Godot scripting language.

It’s still at an early stage and there is a lot of work ahead, but it’s a good opportunity for users to have a first look at it and return feedback.

Indeed, when we decided to implement Mono/C# as a scripting language in Godot over a year ago, we reached out to Microsoft with Miguel de Icaza’s support to see if they would consider funding this work with a donation. They did, and I’m glad to announce that we received a $24,000 donation from Microsoft, which we used to fund my and Juan’s work via our non-profit charity Software Freedom Conservancy.

The first thing you must know is how to declare the script class. Unlike GDScript, in C# you must declare your script class explicitly. A file can have many classes; a class must have the same name as its file (case sensitive) in order for Godot to know that it’s the script class:

The above example would be the equivalent to GDScript’s:

As you can see, the C# API’s naming convention uses PascalCase (Note: As of alpha2, there are still a few names in snake_case. Renaming will be finished for the next alpha or beta release). Global scope methods and constants are available in the GD class, except those that are math related are located in the Mathf class. 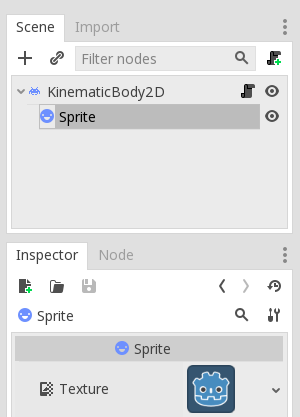 Now, let’s proceed to add the script named Player.cs to the root node: 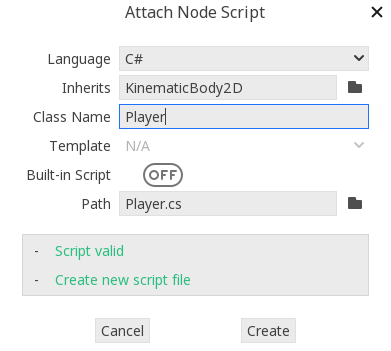 All this script does is add gravity to the player. As you can see, we use the Export attribute to display fields in the Inspector. Unlike GDScript, C# is statically typed, so you don’t need to specify the value type in the attribute. 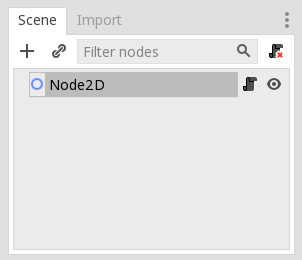 Now, if you come from GDScript, you probably know about a feature called “yield on signal”. It suspends the method and yields the execution to the calling method, and when the signal is emitted, the method will be resumed. You can do the same in C#, by making use of async and await together with the method ToSignal. You can learn more about asynchronous programming in C# by reading this article.

The Godot API (EditorExportPlugin) which allows customizing the export process was added recently, so we still don’t make use of it for C#. Exporting the game will make sure to pack all the required assemblies with your exported game, among other things.

There are many usability improvements and ideas that didn’t make it in time for alpha2. We are also expecting a lot of user feedback from this release!