In the last two reports we laid out the basis for building a Godot application that uses WebRTC to communicate with other peers.

Now, the WebRTC module got an interface to the High Level Multiplayer API, so it can be used as a transport for RPCs/RSETs. The implementation is a full p2p mesh, meaning every player is connected with each other via a "direct" connection, and there is no need for a player to act as a server. 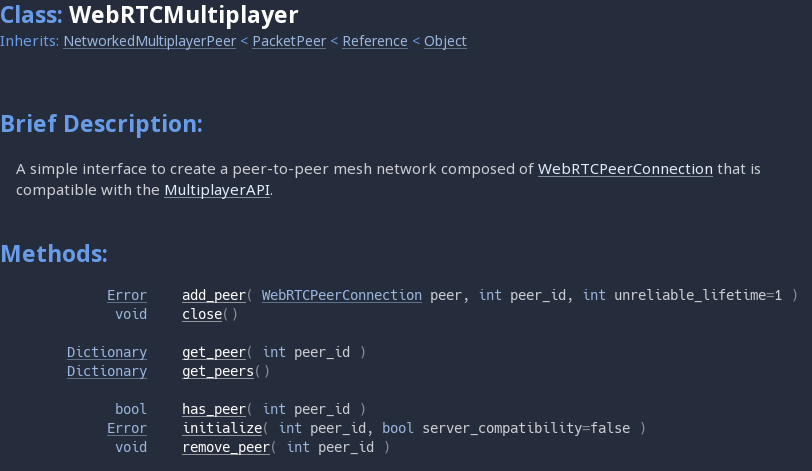 The WebRTCMultiplayer class interfaces WebRTC with the High Level Mulitplayer API. Due to the way WebRTC works, this class needs a slightly more complex setup before it can be used compared to other network peers, but as said it will create a full p2p mesh that is also encrypted at transport level. The idea, is that you will have a signaling server assigning ids to peers, and letting them know about each other.

To setup the multiplayer class one would need to:

Note 1: You don't have to poll each WebRTCPeerConnection separately, just call WebRTCMultiplayer.poll and it will poll all connections added via add_remote_peer.

Server compatibility mode can be used to adapt games written using server/client architecture in mind (e.g. the ENet implementation). The connection will still be a p2p mesh, but one peer will be expected to have id 1 (server), and all peer_connected signals will be suppressed until such a peer connects. When that happens, server_connected will be emitted, the connection state will be set to CONNECTION_CONNECTED and then peer_connected will be emitted for each connected peer.

You can read more about the WebRTCMultiplayer class in the docs.

This blog post will be a bit shorter then the previous ones, but don't worry, there is much more reference material to learn from now!

You can find a new WebRTC tutorial here with two small examples.

Two new demos are available in the godot demo repository. The demos includes one with the two examples in the tutorial, and a reference signaling server using WebSocket, with two server implementations (GDScript, and Node.js) and two GDScript client implementation (raw, and WebRTCMultiplayer).

There is a port of the multiplayer bomber demo using the reference signaling server running live here. Have fun playing it with your friends (and/or studying its source code).

Beside documenting the GDNative plugin build system and building binaries for macOS, the work on WebRTC is pretty much concluded for now, ready for the 3.2 release.

Stay tuned, for more Godot goodies, and as always, thank you for your support!