This article is from March 2017, some of its contents might be outdated and no longer accurate.
You can find up-to-date information about the engine in the official documentation.

February was spent mostly rewriting the import and export workflow of Godot, so not many pretty visual features were added. At the end of the month, I also went to San Francisco for GDC.

The import workflow is mostly complete. Beginning with Godot 3.0, Godot will attempt to import files transparently (no more import -> menu), more in the vein of how Unity works. This was a necessary change for many reasons:

Importing of scenes is now operational. DAE (and hopefully FBX in the future) files are treated as if they were actual scenes (you load them directly from code). Trying to open a DAE file as a scene, however, will display this message:

Of course, as these .dae files are read-only (godot can’t save them), it brings the question of how to modify these scenes. There are a couple different ways to do this:

The export system in Godot has been greatly simplified, but at the same time it became more flexible. There is a new export dialog: 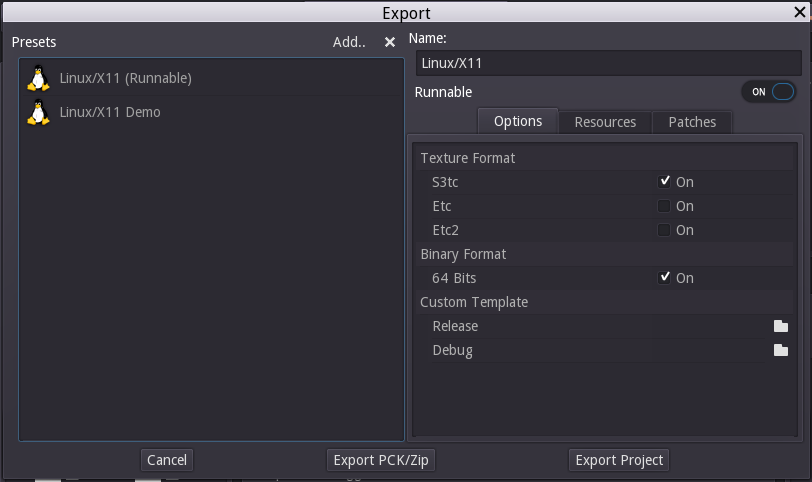 The idea is that, instead of choosing a platform and hitting export, “Export Presets” can be created.

One of the presets has to be the “runnable” one for the platform, which will be used in the one click deploy for many platforms.

A new export mode for exportable resources (“Selected Scenes”) is available, which makes it easy to choose which scenes will be exported. All dependencies are tracked and exported.

The previous modes (all resources and selected resources) are still there. The “All files” mode is gone, as it’s not very useful.

Godot always supported loading patches as extra .pck files, but tools to create them were not readily available. Godot 3.0 will bring a simple tool to create patches based on previous releases and previous patches.

This should make it really easy to create patch files, DLCs, etc.

Exporting to the Web

A new exporter to WebAssembly + WebGL2 is in the works, should be working soon. This will hopefully revolutionize games on the web!

I had the pleasure of going to GDC 2017, San Francisco this year. Initially I wanted to showcase Godot 3.0, but we couldn’t progress as fast as desired so this will have to wait for next year :(. By then the stable version will be out and we will have a lot of awesome demo content.

Compared to last year, some more people had heard of Godot, but it’s still very largely unknown. We seriously need to consider ways to improve on this!

Other than that, some people from key companies were pretty amazed about the new renderer features we have and will be following our progress more closely!

Will be writing a post with more details about this shortly.

All that remains now is to complete and fix the remaining and existing features and we will be releasing an alpha of 3.0. Hope that happens soon!