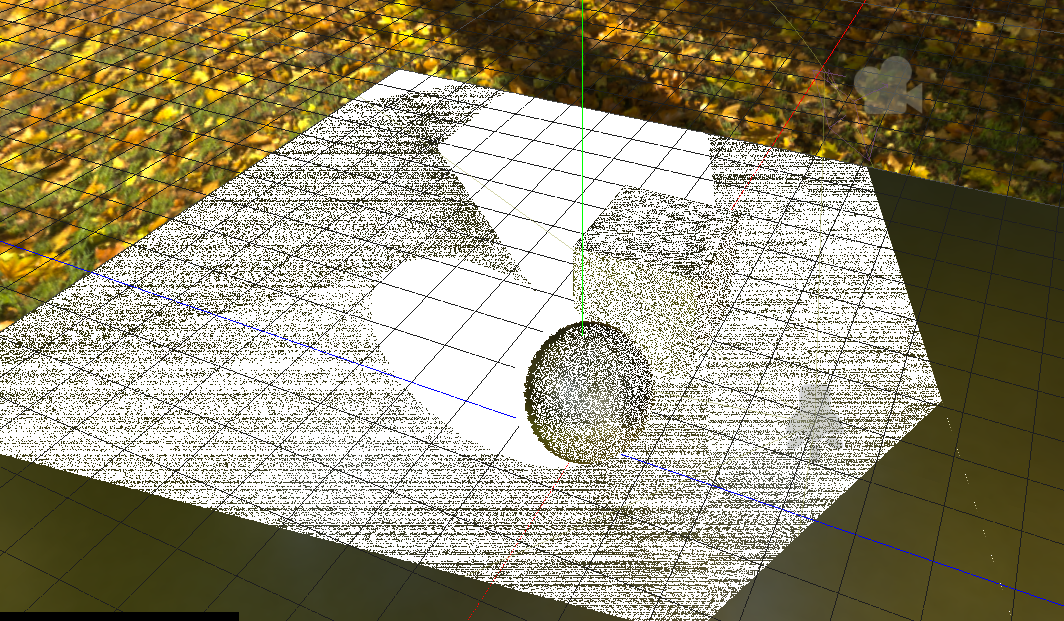 After all the light types are implemented, the next step is to implement shadow mapping, with all its frustrating implementation details ;)

Details about work in June 2018

At the end of May, OmniLights were already working, so the other types of light sources need to be implemented as well.

The first thing I tackled were SpotLights. A SpotLight is pretty much just an OmniLight (so it just emits light in a circular way around it) but the light is restricted to a cone. 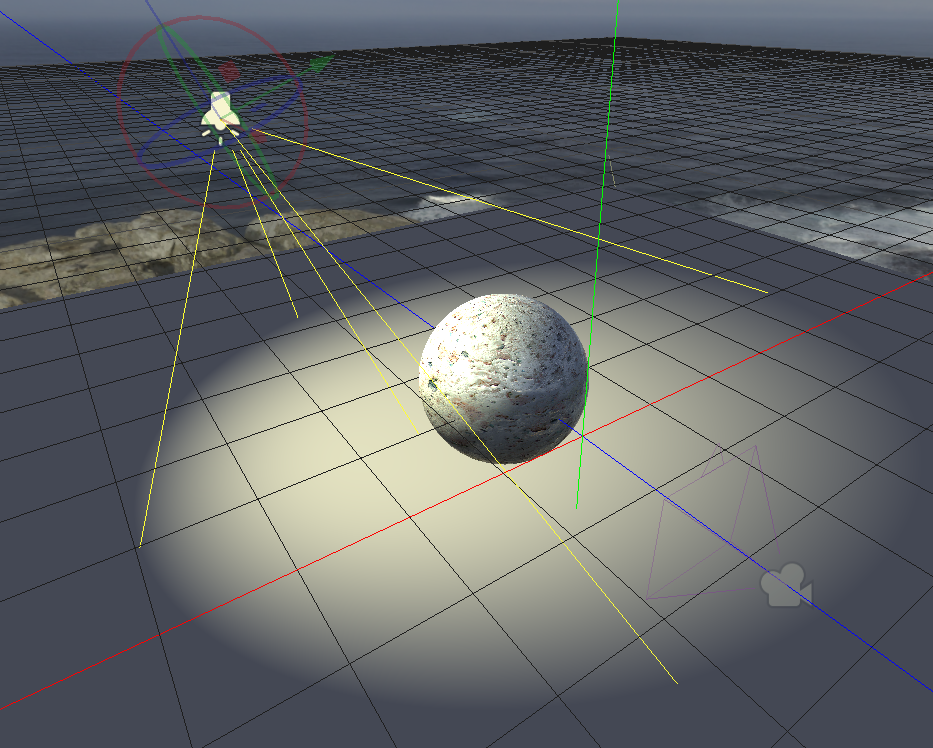 The last light type missing was DirectionalLight, which is usually used to emulate a star or a very far away light source. All this light needs to be described is the direction of the light, no position is needed. The shader code for the lights can be found here.

With that, simple illumination was working, but there were no shadows yet!

I will go more in-depth about shadow-mapping later, for now just know that in order to show shadows, the scene needs to be rendered from the perspective of each light and the result has to be saved.

Since directional lights span the whole scene, they need their own separate storage that's big enough for all this.

SpotLights have a restriction on the angle of the cone, so it can never span more than a half-circle. This means all it needs is a single "image" that shows the space that the light can reach. The higher the angle the more stretched by perspective it will be, but this works just fine.

OmniLights need more information than just a single view. They reach around in a spherical way, so what the GLES2 backend does is render into a cubemap (6 images, arranged like the faces of a cube). Because using 6 images would take quite a lot of storage space, the cubemap gets converted into a "dual paraboloid", which is essentially like two fish-eye-lens pictures.

A DirectionalLight needs their own space, but using single textures for each other light would be pretty wasteful, so what is used as an optimization is a Shadow Atlas. Using a ShadowAtlas lets us pack multiple images into one, and even give them more or less space depending on distance from the camera to achieve better detail.

There is a nice article about lights and shadows on the documentation pages, you can find it here.

For the GLES2 renderer, I had to implement the interface for those shadow atlases. This was mostly coding in "the dark", so there is not much to show yet. The code is located here.

As mentioned before, in order to know which pixels are "in a shadow" and which are lit, the scene has to be rendered from the viewpoint of the light.

But this is not a regular render pass, we are only interested in the depth buffer.

When the VisualServer (the high level render abstraction) calls the renderer, it passes a flag if this draw pass is depth only or a regular call.

A few adjustments and optimizations had to be done to support this properly without wasting computation power.

The result of these draw calls get rendered directly into a shadow atlas or the directional shadow storage.

So now the shadow atlas can actually be visualized! 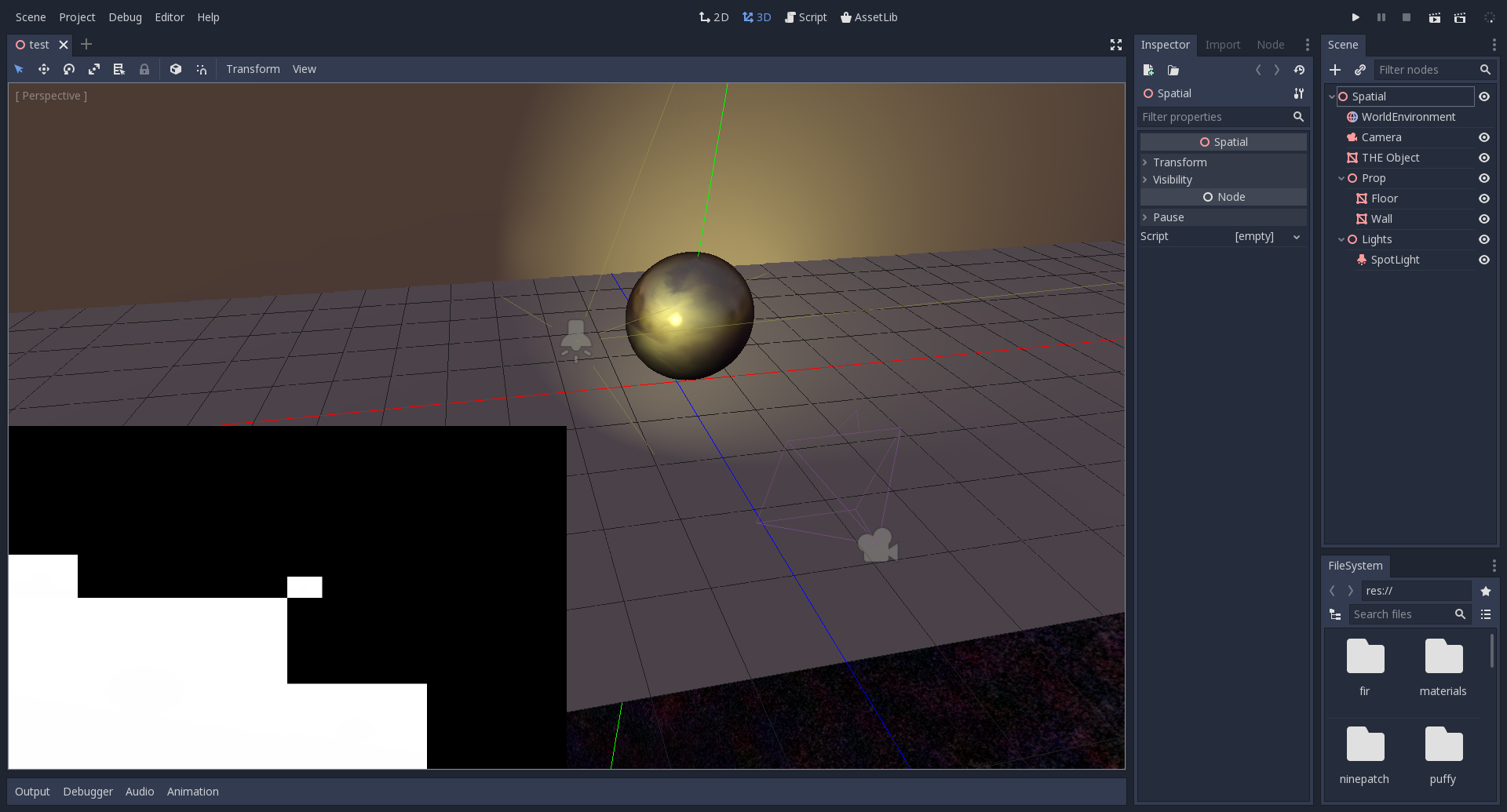 I zoomed out and in when taking this picture, so I could see that the allocation works correctly. But for now everything is white? Shouldn't there be the sphere in greyscale? The problem here is that the depth buffer wasn't linearized, so in order to see if the rendering was actually working I needed to bring the light veeeeeery close. 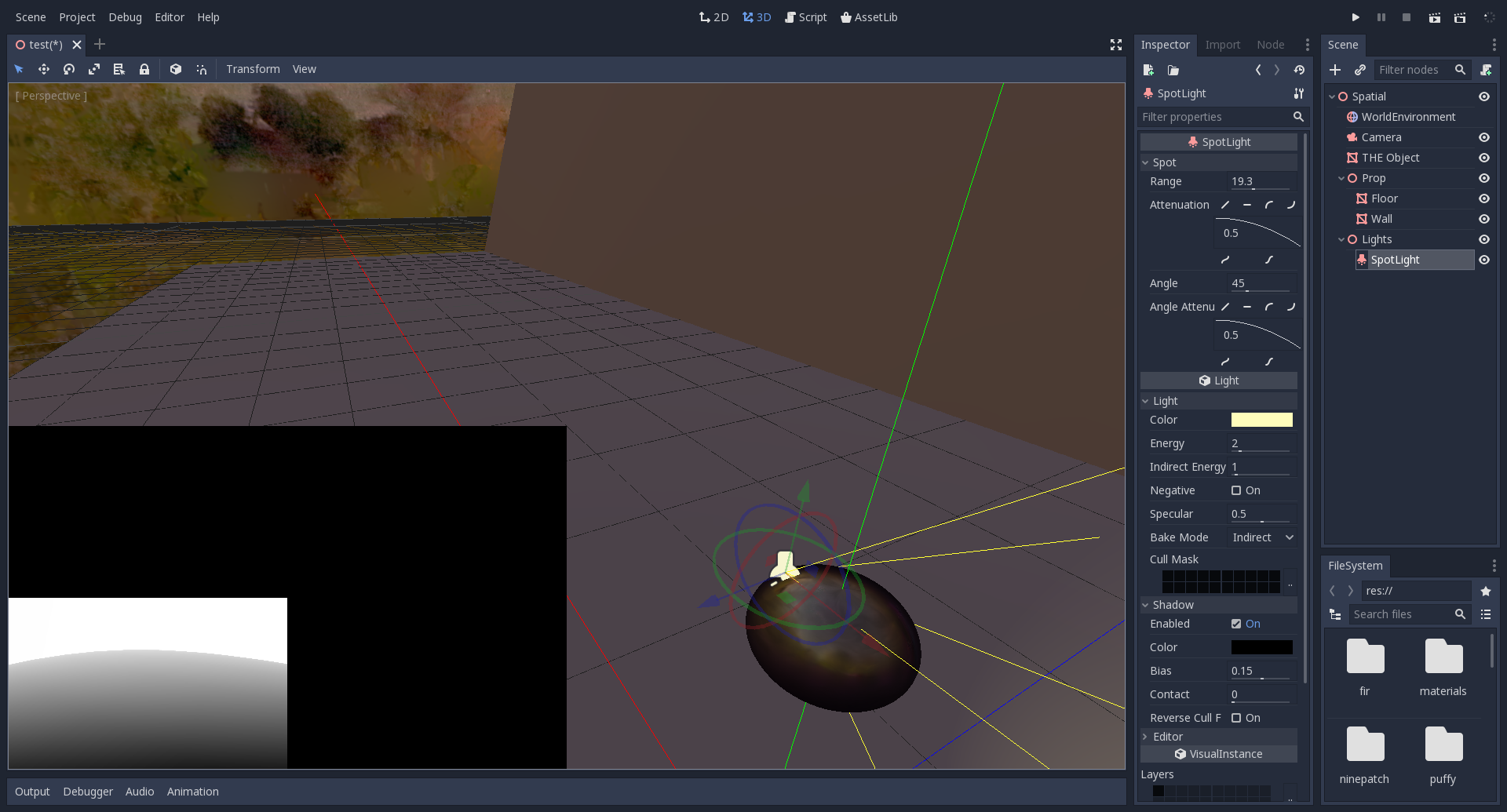 So after coding in the dark for quite a while, the darkness is finally visualized :)

Next on the list - actually do something with those depth renderings.

Each pixel that gets potentially illuminated by the light source has to check if it's in a shadow or not. How is that done?

If the "light depth" of that pixel is "behind" the thing that we rendered, we know that it's in a shadow.

That's a lot of transforms and coordinates and all that. The basic principle is that there is a check to see if something is between the light and the current pixel or not. That's all :)

Sounds easy enough, but in practice it took me maaaaany hours of debugging and guesswork. But, as usual, it made for some nice screenshots. Eventually it worked out... more or less. 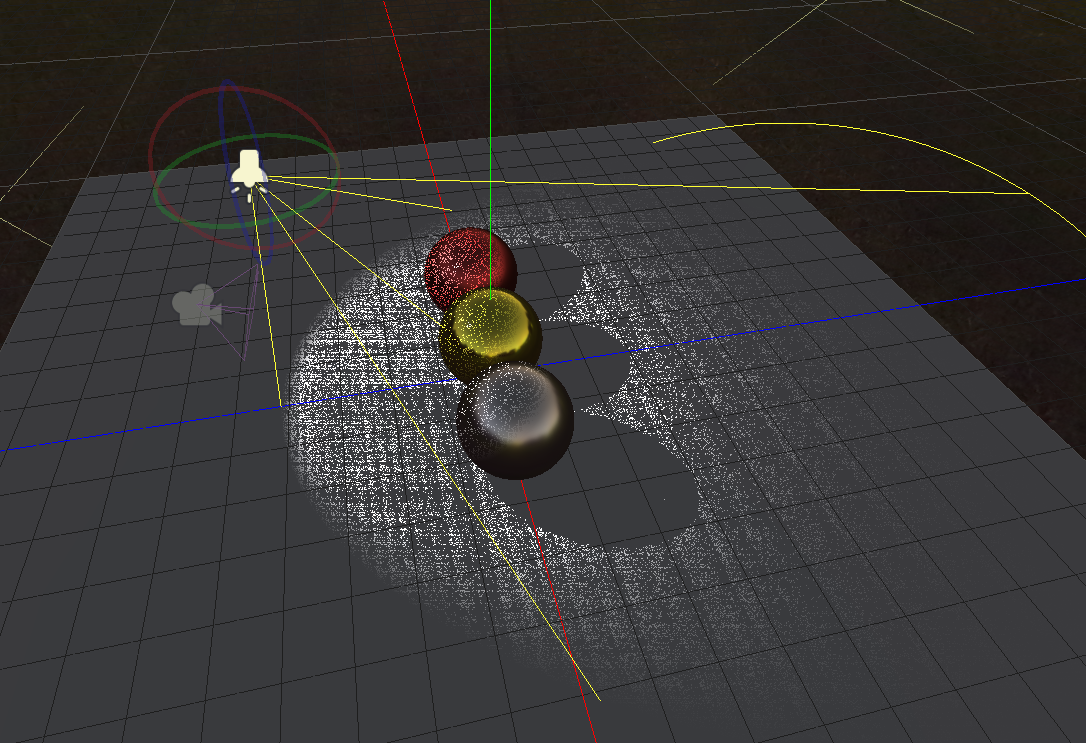 I solved this problem too but didn't take a screenshot afterwards. Just believe me that it was a relief after so many hours of debugging :D

As mentioned, OmniLights use a different way of storing the depth information, but really only the transforms change a little. So after all those countless hours getting the SpotLights working, making OmniLights work was pretty fast. 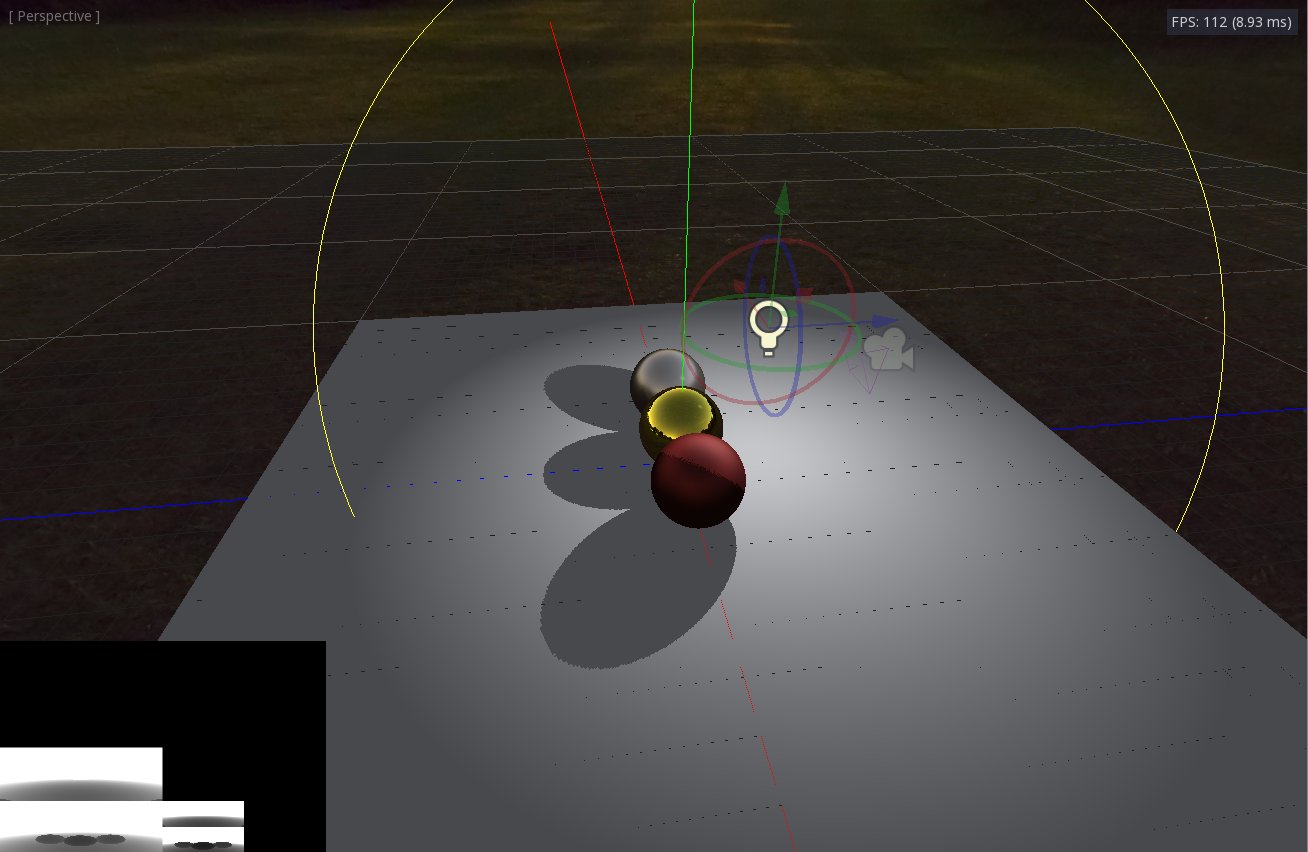 All together it works pretty nicely, some things still need some ironing (mostly "shadowmap filtering"), but the biggest step was taken :) 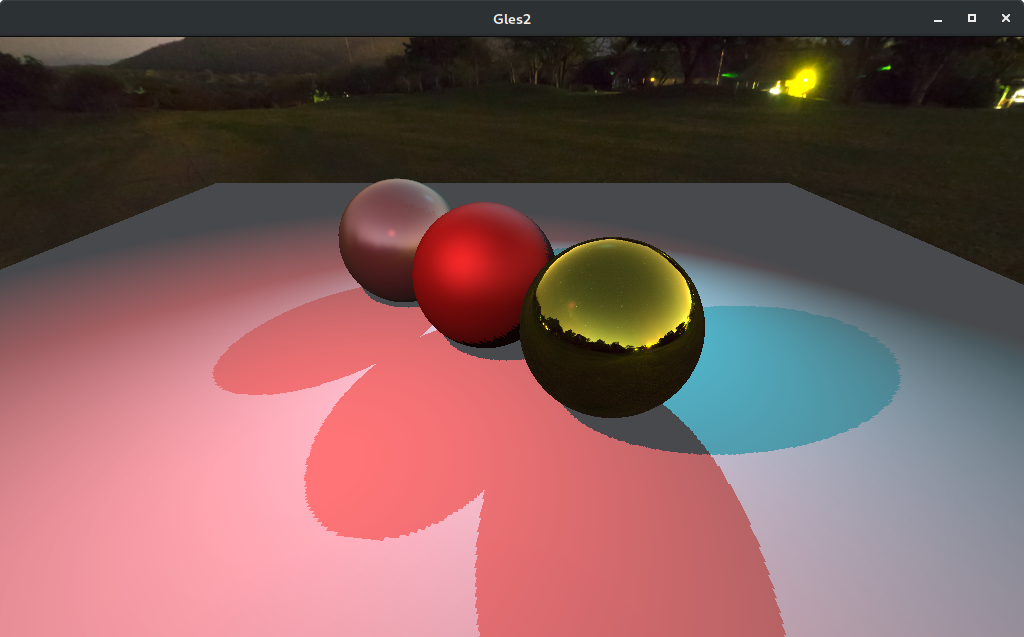 Since Godot's goal is to be as flexible as possible without comprimising usability there are a lot of knobs and switches to take care of in the rendering code. One of those things was support for "billboard modes" and for the vertex shader to skip the vertex transform so the user can do it manually.

This made many more gizmos in the editor show up, so now it is almost as complete as the GLES3 version of the editor, with the exception for things that use ImmediateGeometry, like some handles on light gizmos. Implementing this is planned for next month :)

To catch some breath after all this debugging madness, I took a shot at implementing BlendSpace1D for the new animation system since I needed that in one of my side-projects.

You can read more about the new animation system here!

The code for that can be found here.

The way the lighting is done currently is very bad for the i-cache of the GPU, so some refactoring will be needed to increase performance.

Also the branch will soon be merged into the Godot master branch, so some cleanup will be done for that as well.