A change of Image

Godot has many built-in types. Built-in types are used for non-pointer API arguments, where you need to pass around information fast and you don't really care much about keeping a reference.

One of the early built-in types in Godot is Image, which is like a Vector, but with a little more information related to image data (such as width, height, format and whether or not it has mipmaps).

I tried to track down an early version of Image class and could find this from 2006.

You can see an old Macro from when we used Tolua++ to interface! Back then Godot (or what little was of it) ran on the Nintendo DS and Sony PSP, so indexed texture compression was the most common! Other than that, and save for many helpers for dealing with image processing, this class has not changed much in years.

With the excuse of compatibility, new formats piled up over a decade to end in their current state. Some stuff we added was:

Two decades ago, everyone wanted to make their own graphics API and protect it with patents, so texture compression algorithms were all patented and barely no one wanted to bet on open APIs. To say the truth, only NVidia kept OpenGL kicking, as Intel and AMD support for it were a mess. As a result, there are plenty of competing texture compression formats (out of which only PVRTC is truly innovative IMO, but also patented). PC and consoles generally supported S3TC, but on mobile no GPU manufacturer wanted to lose money to S3 patents so each used their own compression format (or no compression at all, like ARM MALI).

For Apple devices PVRTC is somehow standard, but on Android this is a mess. Google tried to improve the situation by making ETC the standard in all Android devices, but this compression only covers opaque textures.

As Godot 3.0 will remove a lot of compatibility in exchange for many improvements, and given we already started work on a new renderer, this became a great opportunity to clean up this class.

Many formats and naming conventions are now obsolete, and new formats became common. As such, Image is going through a clean-up: 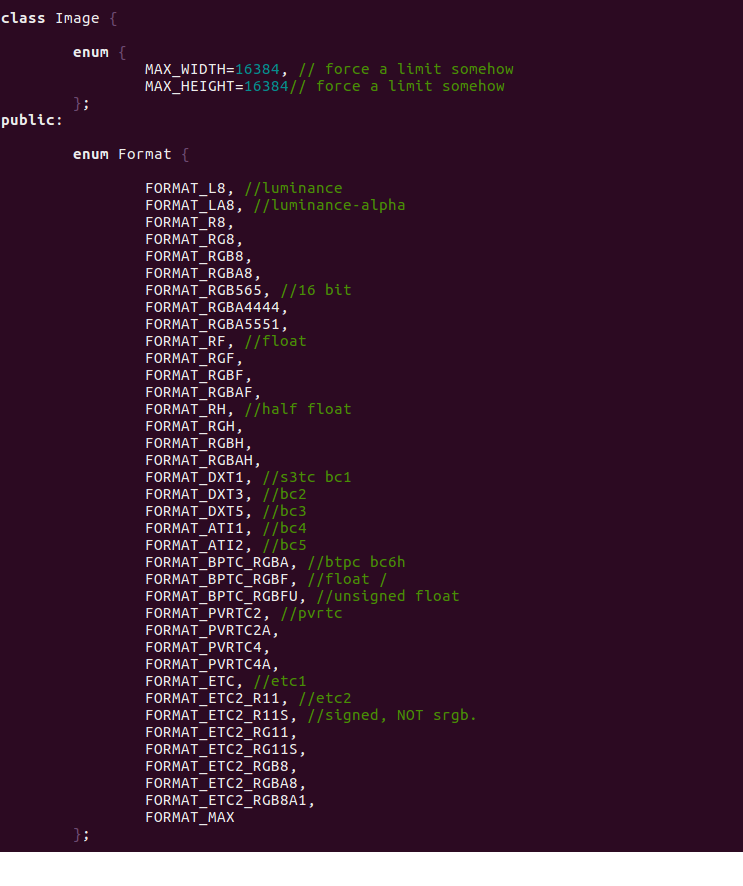 When OpenGL ES 2.0 and non-Vulkan based devices and GPUs become obsolete enough, we'll probably have to rewrite this API again to remove all the extra unnecessary formats, but this won't happen for some years. Feedback welcome!